I am very excited to introduce this special issue of Upward to you, as its focus is on materials research in space. My work at the Academies is centered on the National Materials and Manufacturing Board and the studies produced under its guidance. The most recent Frontiers of Materials Research: A Decadal Survey was published by the Academies this year. The report provides the nation with advice on how to effectively ensure progress in materials research over the coming decade. The report also highlights much of the exciting materials research being done today in the U.S. and abroad and discusses the benefits of moving forward in this central field. The report touches upon the importance the International Space Station (ISS) U.S. National Laboratory and the exciting materials research being conducted on this unique platform. It is clear that the benefits of materials research in space are closely linked to conditions that are difficult to perfectly reproduce on Earth, such as microgravity, radiation, temperature extremes, and environmental conditions such as atomic oxygen.

This special issue of Upward revisits the many ways in which researchers are leveraging these strengths and opportunities for valuable materials research. Gravity is the most obvious difference, and the article “The Little Furnace That Could: Using Space to Improve Radiation Detection” discusses how microgravity is a key player in producing and understanding high-quality crystals. Because many crystals are a complex combination of atomic elements, some in high concentration and others in very low concentration (dopants), gravity tends to prevent uniform distribution and high-quality crystal synthesis here on Earth. These same issues also play a role in the production of materials such as the optical fibers described in the article “Exotic Glass Fibers From Space: The Race to Manufacture ZBLAN.” Soon, there will be not only small test samples of such fibers produced in space but fibers up to 100 m long, representing a shift from validation to production of this key optical fiber that is 10 to 100 times better than traditional silica fibers when it comes to signal loss. Gravity is also central to the work described in the article “The ISS & Household Products: How P&G is Using Space to Improve Customer Experience.” Procter and Gamble (P&G) used the microgravity environment of the ISS to determine how to create conditions in a liquid that enable the suspension of different-sized particles. The P&G team did this in the form of microscopic nets that can gently suspend particles in a mixture and thus prevent separation, as if gravity had no effect, helping the company enhance its consumer products for all of us on Earth.

Two articles showcase materials research that leverages the extreme space environment. The article “Bringing Motion to Life: Materials Science Research in Space” discusses the use of radiation exposure for the testing of “smart” electroactive polymers that contract in a way that is similar to muscles for use in prosthetic implants in humans. Such materials could also one day help robotic systems clean up radioactive areas or explore space. The article “Tough Enough for Space: Accelerating Materials Testing With a New Permanent Platform” describes a facility available on the exterior of the ISS that allows investigators to analyze the durability of materials in response to temperature extremes and the harsh environmental conditions of space such as atomic oxygen.

Last year, I had the honor of speaking at the first Materials Science in Space Workshop, co-sponsored by the ISS National Lab and the National Science Foundation, held in conjunction with the 2018 ISS Research and Development Conference (ISSRDC). At the workshop, I presented the recommendations from the Academies’ 3D Printing in Space report from 2014, which was the same year the first tool (a ratchet) was designed on the ground, emailed to space, and printed in orbit. Now, the Additive Manufacturing Facility has been a permanent “machine shop” on the ISS for more than three years, bringing us closer to the possibility of designing tools directly for their use in space rather than to withstand launch. An exciting chapter in manufacturing is indeed unfolding, and the article “The New Gold Rush: 3D Printing in Micro-G” further discusses the progress of in-orbit production. This year, the ISS National Lab and NASA’s Space Life and Physical Sciences Research and Applications Division held a second Materials Science in Space Workshop at ISSRDC 2019, a telltale sign of the importance of space-based materials research today and in the coming decade. 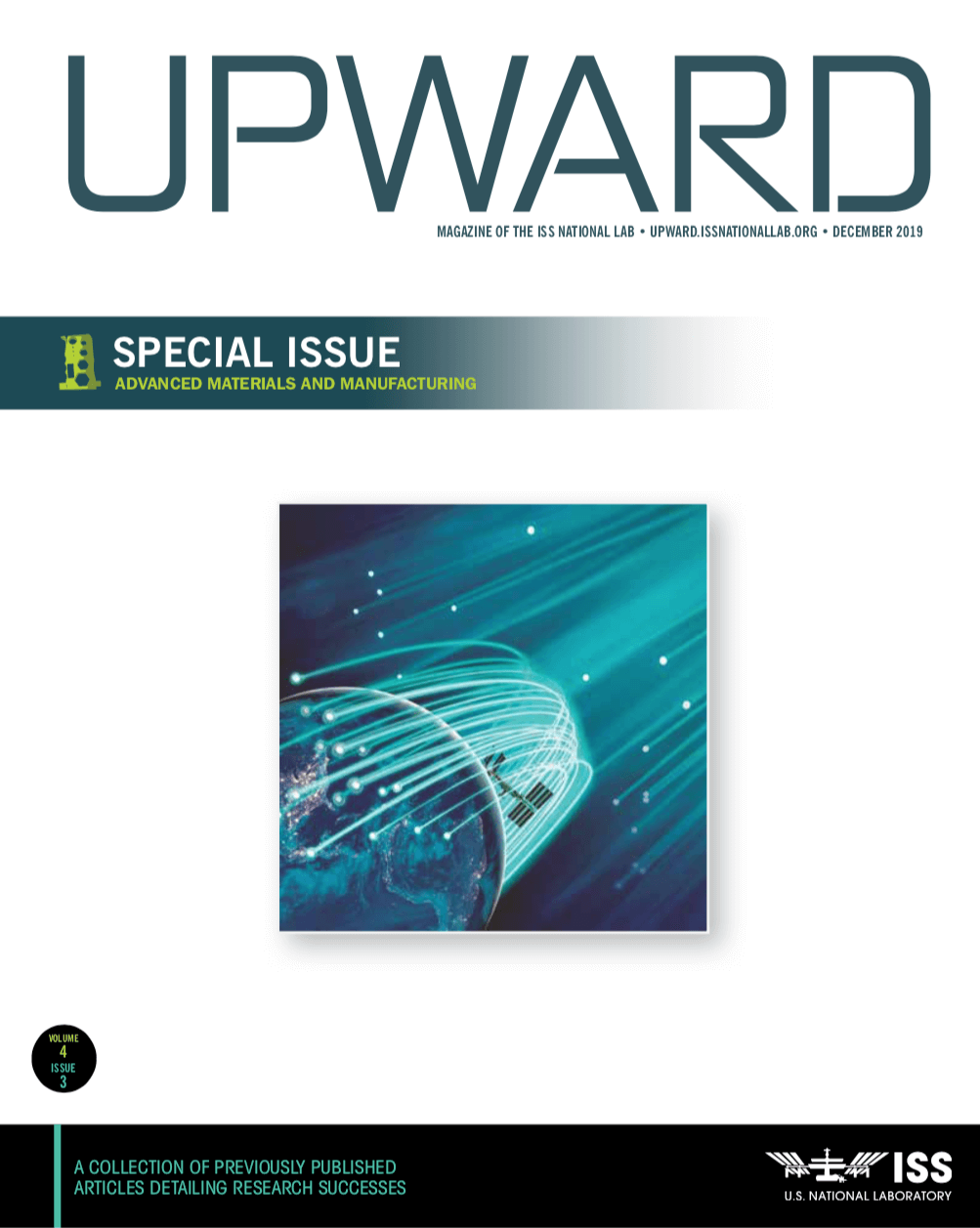