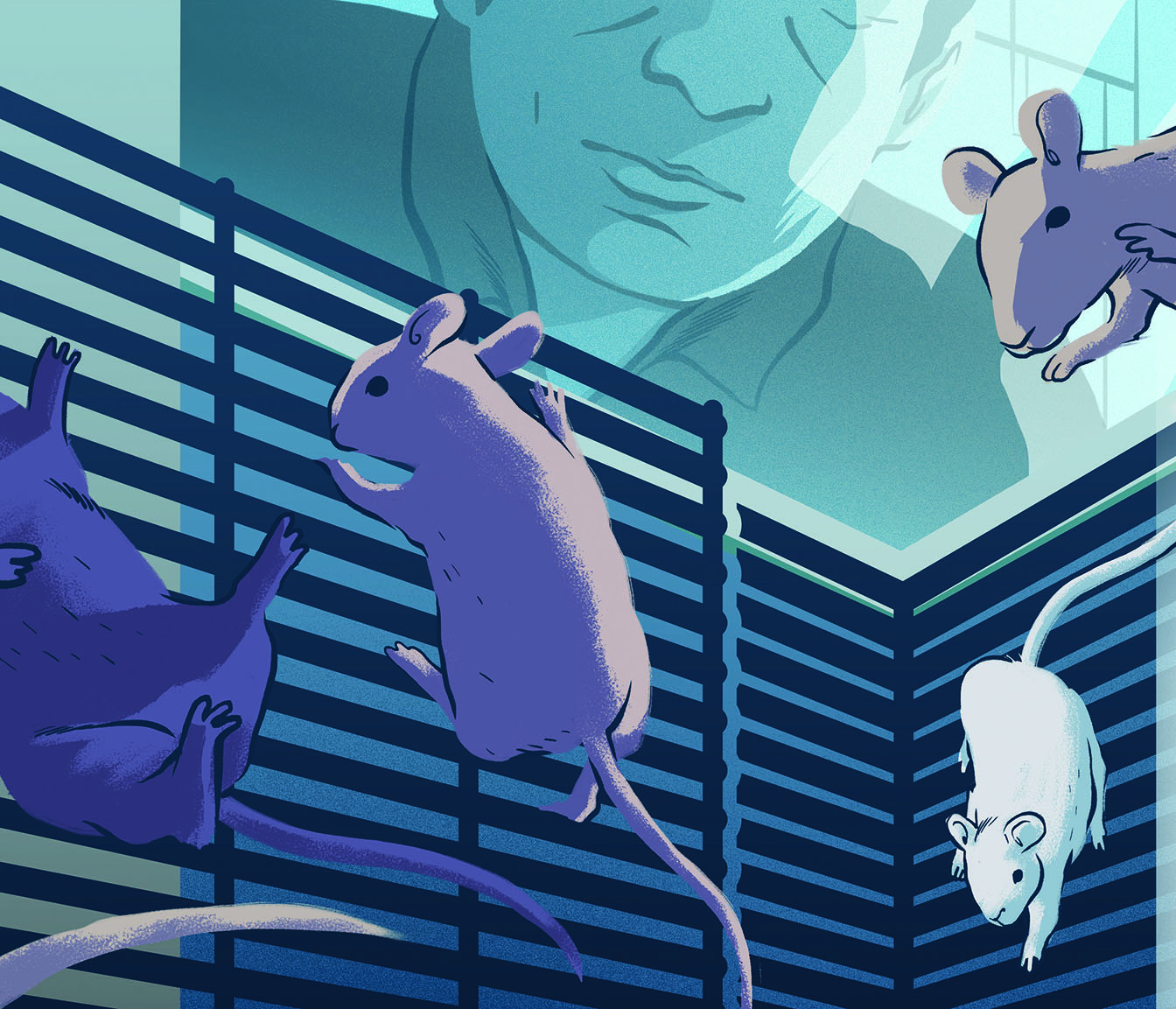 Rodents have been traveling to space since the 1950s, helping to pave the way for humans to safely venture off our planet. Since these early voyages of discovery to determine whether space research. Rodents provide critical insight into not only the effects of spaceflight that impact astronaut health but also effects that mimic human disease on Earth, including those targeting the musculoskeletal and cardiovascular systems, immune function, wound healing, and metabolism.

Rodents flew on 27 U.S. space shuttle missions, and thanks to the work of scientists and engineers at NASA’s Ames Research Center, rodents now have a new role in space research onboard the ISS National Lab. Previous shuttle missions housed rodents in microgravity for about 10 days. The new Rodent Research Hardware System is designed to allow rodents to spend up to 180 days in space, greatly improving our ability to use this powerful animal model to study the effects of spaceflight on human health.

Rodents are surrogates for studying human disease because they share many similarities to humans in terms of anatomy, physiology, and genetics. Rodents and humans share virtually the same set of genes, and there is great similarity in genetic sequence and protein function.

Due to the similar genomes but much shorter lifespan of rodents—typically around two years—mice and rats experience many of the same diseases and effects of aging as humans, but on a vastly accelerated timescale, said Ruth Globus, ISS rodent research project scientist and co-director of the Bone and Signaling Lab at Ames.

“Repetition are similar to humans in that as they age, they undergo detrimental changes such as bone mineral loss and muscle wasting,” Globus said. “However, because rodents age much more quickly than humans, studies that would take years to conduct in humans can be done in weeks using rodents.”

This accelerated path to results is even further amplified by spaceflight, which induces rapid physiological changes in humans and animals, including accelerated bone loss and muscle wasting. By housing rodents onboard the ISS, experiments can be designed to better understand the mechanisms of these adverse effects and potentially develop solutions. The results from rodent studies on the ISS could not only enable longer space missions for humans in the future but also translate into new targets for the diagnosis, treatment, and prevention of human disease on Earth.

Rodent Research-1 (RR-1), which launched in September 2014, was the inaugural mission to validate the new ISS Rodent Research Facility. The facility includes modules for transporting rodents to and from the ISS as well as units to handle and house the rodents with ample food, water, and environmental control during the mission (see The Rodent Research System below).

The RR-1 mission delivered 20 mice to the ISS—10 as part of NASA-sponsored research and 10 supporting a commercial CASIS-sponsored investigation. The mission also delivered key hardware components to the ISS, including the Rodent Research Hardware System and the bone densitometer, a dual-energy x-ray device designed by Techshot, Inc.

Additionally, data obtained from the bone densitometer is downlinked from the ISS to researchers on the ground, providing data in near real time.

While the primary goal of RR-1 was to validate the performance of the Rodent Research Facility, the translational research experiments performed in this inaugural mission also sought to elucidate microgravity’s effects on organisms at a molecular and organ-system level.

For example, tissue samples from the 10 mice flown for the NASA-sponsored study were collected and analyzed for markers of gene expression and tissue responses as well as protein content. These analyses both validated crew procedures for future spaceflight research and provided investigators with detailed information on the biological effects of long-term spaceflight on healthy mice.

A New Platform for Innovation and Translational Biomedical Research

Robust success of the RR-1 mission paved the way for the Rodent Research-2 (RR-2) mission, which included an expanded investigation by the Novartis group. RR-2 built on the results from RR-1 by assessing changes in mouse hind-limb muscles, including skeletal muscle mass and fiber size. Mice in RR-2 were also exposed to spaceflight for varying periods of time—ranging from 2 to 8 weeks—to determine the progression of muscle wasting over time in the mice.

The ultimate goal of these Novartis rodent research studies is to aid in the development of new therapeutics to prevent or ameliorate the devastating effects of muscle wasting diseases. CASIS continues to facilitate such use of the Rodent Research Facility for research aimed at truly improving human health on Earth. Future Rodent Research missions 3, 4, and 5 (see Upcoming Rodent Research Missions below) are all currently slated to take on this grand challenge.

The ability to collect and analyze spaceflight data on individual mice by repeated measures of their bones and muscles accelerates the pace of medical discovery. Such research provides insight into the effectiveness of therapeutics designed to delay medical conditions such as osteoporosis (loss of bone density) and sarcopenia (loss of muscle mass and strength).

The ISS National Lab is thus a critical platform for research that may improve the quality of life for those of us here on Earth—and the new ISS Rodent Research Facility is a huge step toward augmenting our ability to realize that potential.

Both CASIS and NASA are reaching out to the scientific community to identify disease areas that could benefit from rodent researchin a microgravity environment, said Janet Beegle, project manager at NASA’s Ames Research Center. This may result in not only new planned missions but also tissue- and data-sharing collaborations (see Tissue Sharing and the GeneLab Campaign to the right).

“We want to inform the experts in these disease areas about the capabilities onboard the ISS National Lab,” Beegle said. “We then want to work with them to design and implement research missions that will have a significant impact on human health.” 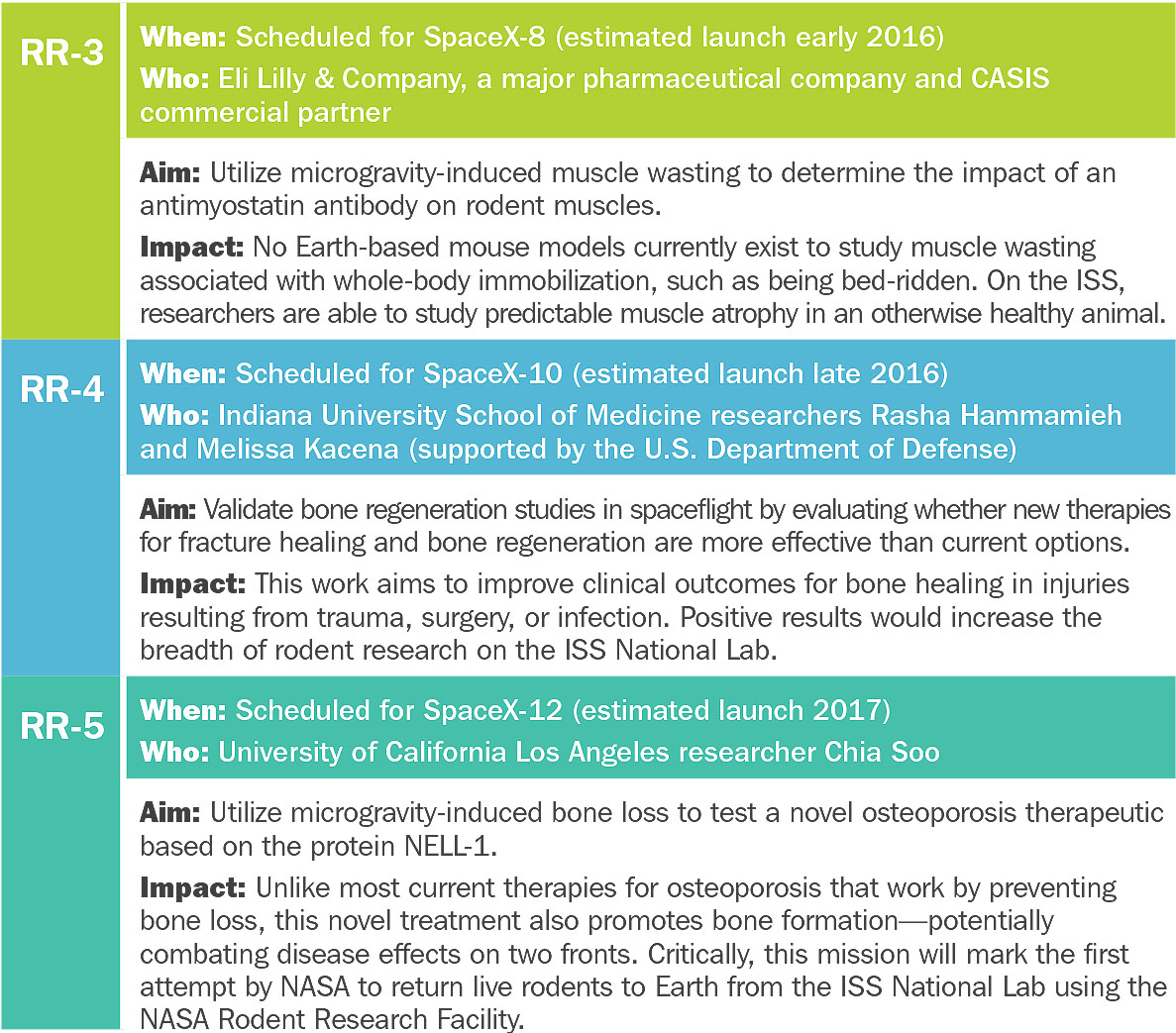 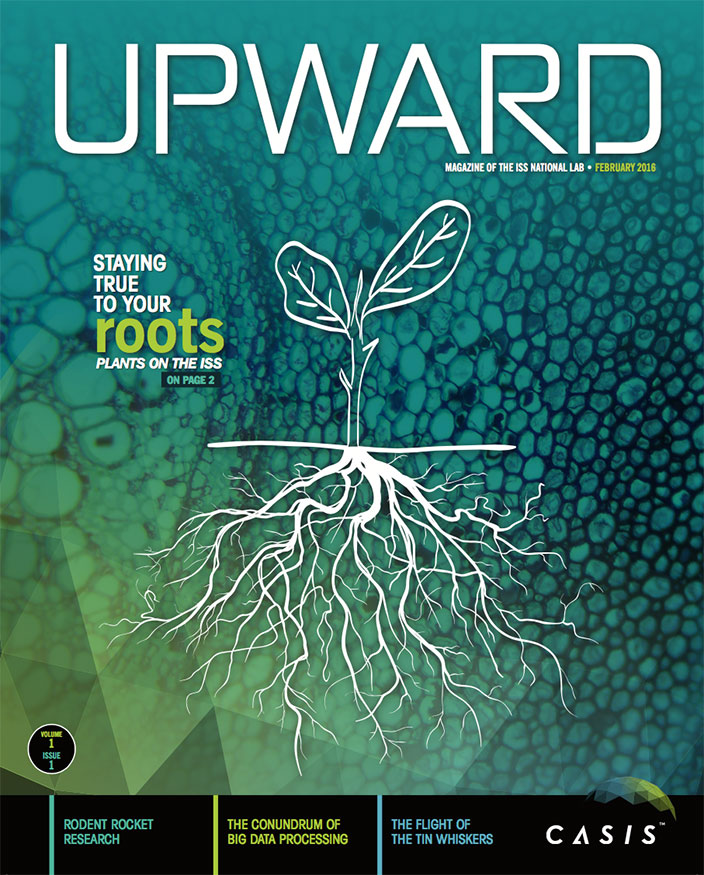 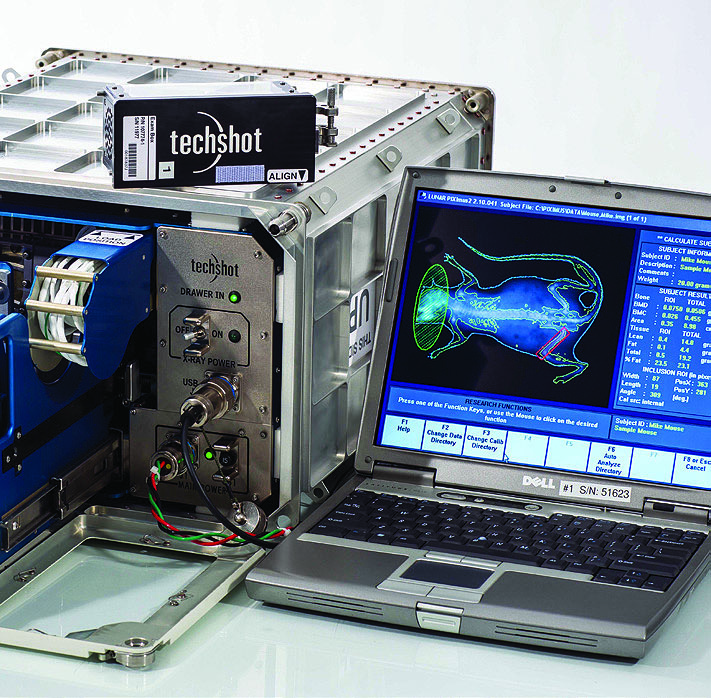 GeneLab is a NASA initiative to create a centralized bioinformatics system that consists of a sample repository and a database for depositing, accessing, analyzing, and modeling datasets from model organisms exposed to the microgravity environment. GeneLab is being designed to integrate with existing databases containing results from Earth-based studies, and it will facilitate sharing of unique life science data obtained in spaceflight for comparison against carefully matched ground controls.

As the open-access, online searchable data repository for data from select rodent research missions and associated tissue sharing initiatives, GeneLab will benefit basic and translational research as the primary gateway to integrated genomics, transcriptomics, proteomics, and metabolomics data for health research comparing disease models in space to those on Earth. 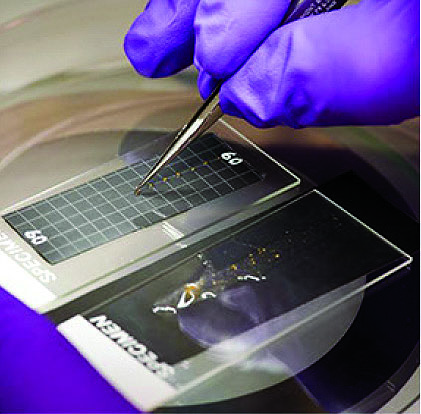 The Rodent Research Hardware System consists of three main components: the Transporter Unit, the Animal Access Unit, and the Habitat Unit. The Transporter Unit houses rodents on their voyage from Earth to the ISS. The unit can house 20 mice or 12 rats for up to 10 days and contains all the necessary consumables for the rodents.

Each individual Habitat Unit can house 10 mice or 6 rats for up to 90 days, supplying the rodents with food, water, fresh air, and lighting systems that simulate day and night conditions. The units contain infrared and visible-light cameras as well as other sensors that allow constant monitoring. 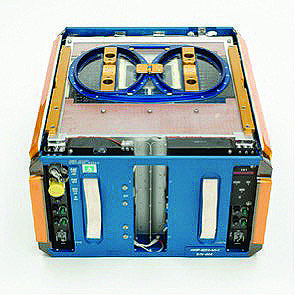 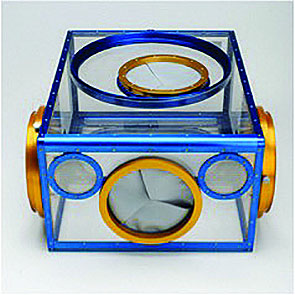 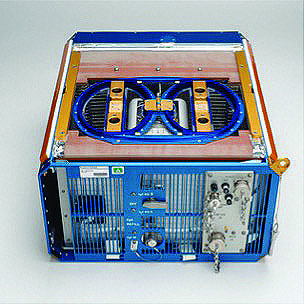