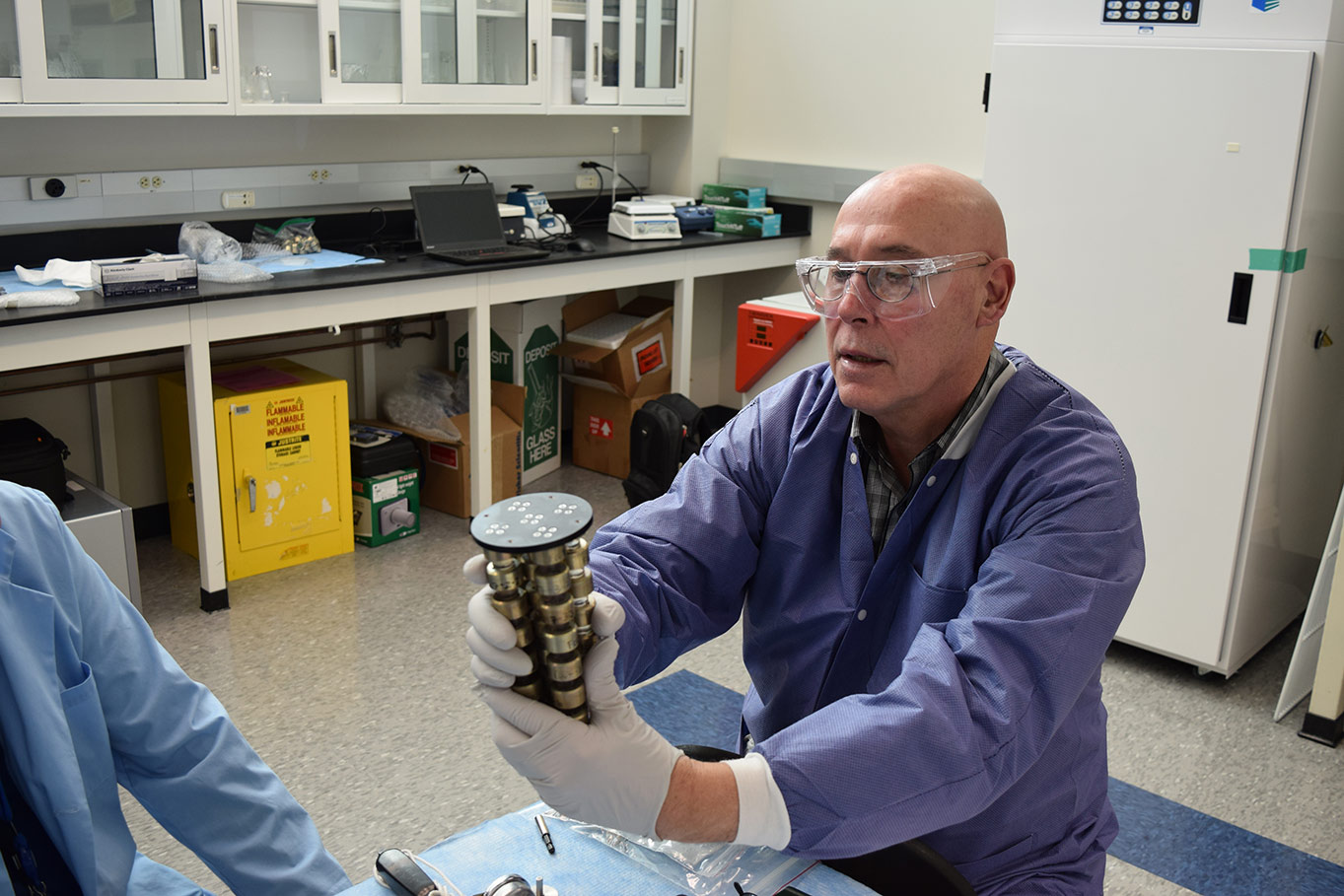 Many cancer therapies, such as Merck & Co.’s immunotherapy drug Keytruda®, are dilute solutions of large molecules called monoclonal antibodies in a saline solution that must be given intravenously (IV) through a slow infusion over the course of several hours in a doctor’s office or hospital. However, if pharmaceutical companies like Merck discover a way to formulate these drugs as highly concentrated crystalline suspensions, the medicine may one day be given as a simple injection under the skin during a quick visit to a doctor’s office.

A team of Merck researchers is utilizing the unique microgravity environment of the ISS National Lab as a first step in trying to achieve just this.

“The drug might provide tremendous benefit, but the route of administration isn’t necessarily ideal,” said Matthew Truppo, executive director and head of Chemical Biotechnologies and Global Structural Sciences at Merck. “If we could simplify the administration, it would be better for the patient and practitioner, and it would make the entire process a little easier to handle.” 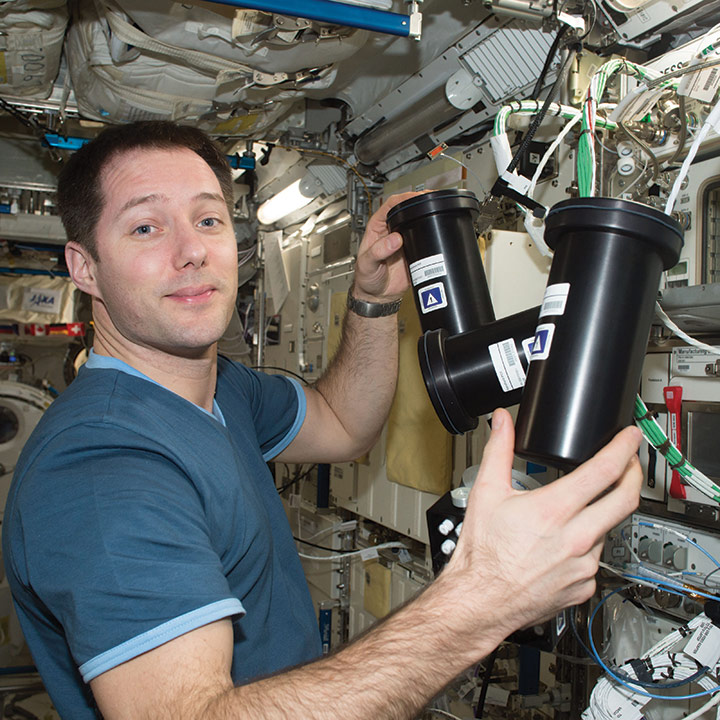 Merck’s investigation, led by Principal Investigator Paul Reichert, associate principal scientist at Merck, launched on SpaceX CRS- 10 in February 2017. The experiment sought to grow millions of highly ordered, uniform crystalline particles of the therapeutic monoclonal antibody Keytruda®. The team’s research has applications aimed not only at improving drug formulation and delivery but also at improving the drug purification process. Additionally, results from this investigation could lead to improved drug stability and storage.

“Conducting experiments on the ISS National Lab gives us the opportunity to test unique preparations and make primary discoveries that we can then apply to drug development on the ground and onward to manufacturing,” Reichert said. “It’s a long process, but what we find in this investigation could be very important not only for the drug Keytruda® but also for therapeutic monoclonal antibodies in general.”

Many protein crystallization experiments on the ISS seek to grow large, high-quality crystals (or crystal complexes of proteins bound to small molecules) for structural analysis aimed at structure-based drug design. However, Merck’s investigation is quite different. Instead, Reichert and his team were aiming to grow a crystalline suspension of millions of tiny uniform crystals.

Monoclonal antibodies are not very soluble, which is why it is difficult to get highly concentrated formulations of drugs like Keytruda®. If it were possible to produce high quality crystalline suspensions of therapeutic monoclonal antibodies, it would enable pharmaceutical companies such as Merck to change the formulation of these drugs from an IV to an injection, which would greatly improve patients’ quality of life. If such drugs could be given as a quick injection at a doctor’s visit, it would save time and reduce costs.

This investigation followed from experiments in the space shuttle era, in which Merck researchers crystallized another biologic drug, alpha interferon, and instead of getting a single large crystal, they got a crystalline suspension of small crystals that were very uniform in size. “We’re applying what we learned from the space shuttle era to a new type of biologics, monoclonal antibodies,” Reichert said.

Monoclonal antibodies make up the majority of therapeutic biologic drugs. However, many monoclonal antibodies are difficult to crystallize on Earth, which is why Merck turned to the ISS National Lab for crystallization. Minimizing gravity significantly reduces physical forces that are dominant on the ground, contributing to the production of more ordered, high-quality crystals that often provide higher-resolution structures.

“The ISS represents a truly unique laboratory platform where you can access conditions that you just can’t access here on Earth,” Truppo said. “There are many things you can replicate on Earth that are conditions you might find in space, but what you can’t do is replicate microgravity.”

To grow high-quality crystals, Reichert and his team took advantage of the decreased fluid motion in microgravity and improved conditions for the formation of ordered crystal lattices. These benefits of space-based crystallization are due to several physical forces being reduced in microgravity.

“When you’re trying to get very high quality and very uniform crystals, it’s important to have a really slow and orderly process by which those molecules come together to form a crystal,” Truppo said. “The more you minimize movement within the solution and rely solely on the ability of the molecules to one by one come together and build the crystal lattice, the more likely you’ll get a highly ordered, pure crystal.”

By crystallizing therapeutic monoclonal antibodies on the ISS National Lab, Merck researchers hope to learn more about the key variables affecting crystal growth that could then be applied to pharmaceutical applications of interest back on Earth.

“To be able to take away a fundamental force for an extended period of time and see how that affects processes we are used to running on Earth could potentially lead to incredible insights into the fundamentals of how those processes work,” Truppo said. “And then we can start thinking about how to exploit that information back on the ground and change the way we do things.”

“Currently, most monoclonal antibody preparations have a limited shelf life and must be stored under refrigerated conditions in large, cumbersome bags,” Reichert said. “It would be advantageous to develop a concentrated drug substance that is stable at room temperature that could be moved to formulation sites around the world in small containers.”

Merck is currently trying to demonstrate that crystalline suspensions of monoclonal antibodies are stable in long-term storage at room temperature, which would be a tremendous advantage. It would eliminate the need for and costs of refrigerated transportation and would enable distribution of the drug in areas of the world that lack refrigeration. Additionally, lowering the costs of production and transport could ultimately lead to lower costs for patients.

Merck is also hoping to improve the purification process involved in manufacturing therapeutic monoclonal antibodies. Currently, monoclonal antibodies are produced using cell culture fermentation, followed by multiple steps to purify and isolate the active ingredient from the fermentation broth using a technique called chromatography. This purification process is effective, but it is also very time consuming and expensive. Merck is trying to see whether crystallization could be used to purify monoclonal antibodies directly from the fermentation broth, thus significantly reducing or eliminating the need for extensive chromatography and, in turn, lowering production costs.

In their SpaceX-10 investigation, Reichert and his team sent to the ISS samples of the monoclonal antibody at different steps in the purification process, including some that were very crude extracts from the fermentation broth. The researchers wanted to see whether crystals would form out of the crude broth and what level of purity could be achieved.

“The question is—can we directly crystallize out of the fermentation broth?” Truppo said. “Can we produce crystals that potentially match the quality and purity of our entire production process, in which we do multiple chromatography steps until we get to a very pure antibody?”

Reichert and his team are now in the process of analyzing their samples. The team first performed microscopic analyses to determine the particle size distribution of the flight samples versus ground samples in a blind study. Reichert said preliminary results are successful, and the differences between the ground and spaceflight samples are clear. 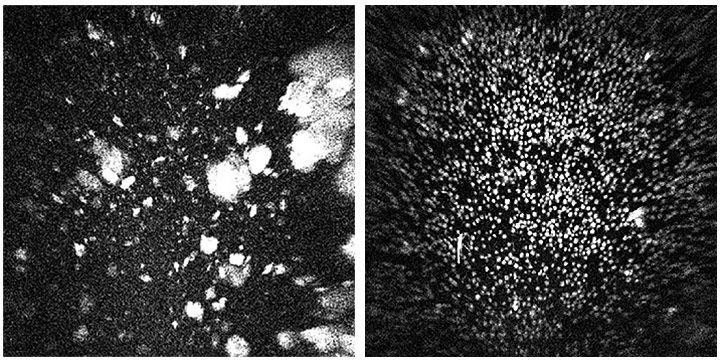 UV imaging of a ground control sample (left) and spaceflight sample (right) from Merck’s investigation, clearly showing the much more uniform size and distribution of crystals grown in microgravity.

The team is also using a battery of biophysical characterization methods to analyze the samples. If the space-grown crystals meet the desired property parameters, researchers can apply that information to experiments back on the ground. “It would give us a lead that tells us we should invest the extra time and resources to identify alternate process conditions on Earth that could be used to recreate the crystals we observed in space,” Truppo said.

The team’s findings could help researchers better understand the crystallization process of not only Keytruda® but also therapeutic monoclonal antibodies in general. Such knowledge could lead to important advances in monoclonal antibody drugs that could one day translate into significant improvements in quality of life for patients with cancer and autoimmune disorders.

“This experiment really has boundless potential applications,” Truppo said. “And I can’t think of any better example of boundless research than conducting experiments in space onboard the ISS National Lab.”

The drug helps the body’s own immune system detect and destroy cancer cells.

Biologic drugs are unlike normal drugs in that they are not manufactured through a chemical process in a lab. Instead, biologics are a class of drugs made from large complex molecules derived from living organisms, such as microorganisms or human or animal cells.

In microgravity, several physical forces are minimized, which improves the conditions for ordered crystal growth.

Sedimentation: On the ground, as crystals grow in a vial, gravity causes crystals to fall to the bottom and sediment. However, in microgravity, the crystals remain suspended in the solution. This results in less turbulence around the crystal as it is growing, which leads to higher-ordered crystals.

Convection: On Earth, temperature differences in a poorly mixed solution lead to a density difference, which gravity drives into two currents (the warmer lower density fluid moves up, and the cooler higher-density fluid moves down). In microgravity, however, temperature differences do not lead to convection currents, resulting in less bulk fluid movement around the crystals and the growth of more uniform crystals. Additionally, the absence of convection currents results in a more uniform temperature gradient that can benefit crystal growth because precise temperature control is needed.

Rate of molecular diffusion: Microgravity reduces the rate at which molecules move in a solution. This allows the molecules to enter the crystal lattice more slowly and in a more organized, orderly way.

There are many hardware options for protein crystallization that support various methods of crystal growth. Merck researchers used two types of hardware in their investigation.

Protein Crystal Growth (PCG) Box:
The PCG box can hold five six-packs of samples. This hardware enables a process called vapor diffusion, which is usually used to grow crystals for structural analysis. The PCG box is easy for ISS crew members to operate—they simply use a wrench hooked on the side of the handheld box to turn a valve that exposes the protein samples to solvent. 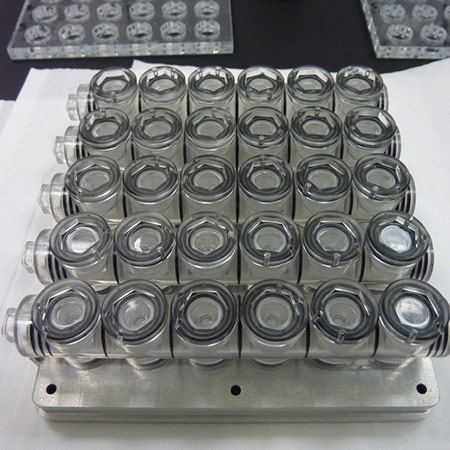 Protein Crystallization Facility:
This hardware consists of a module that holds up to five stacks of seven 1-mL bottles. The module can be kept at a very precise temperature, and researchers can vary the conditions within the module. To operate the hardware, ISS crew members place the module into an incubator and ramp up the temperature to induce crystallization. 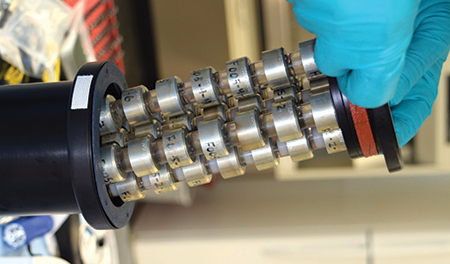