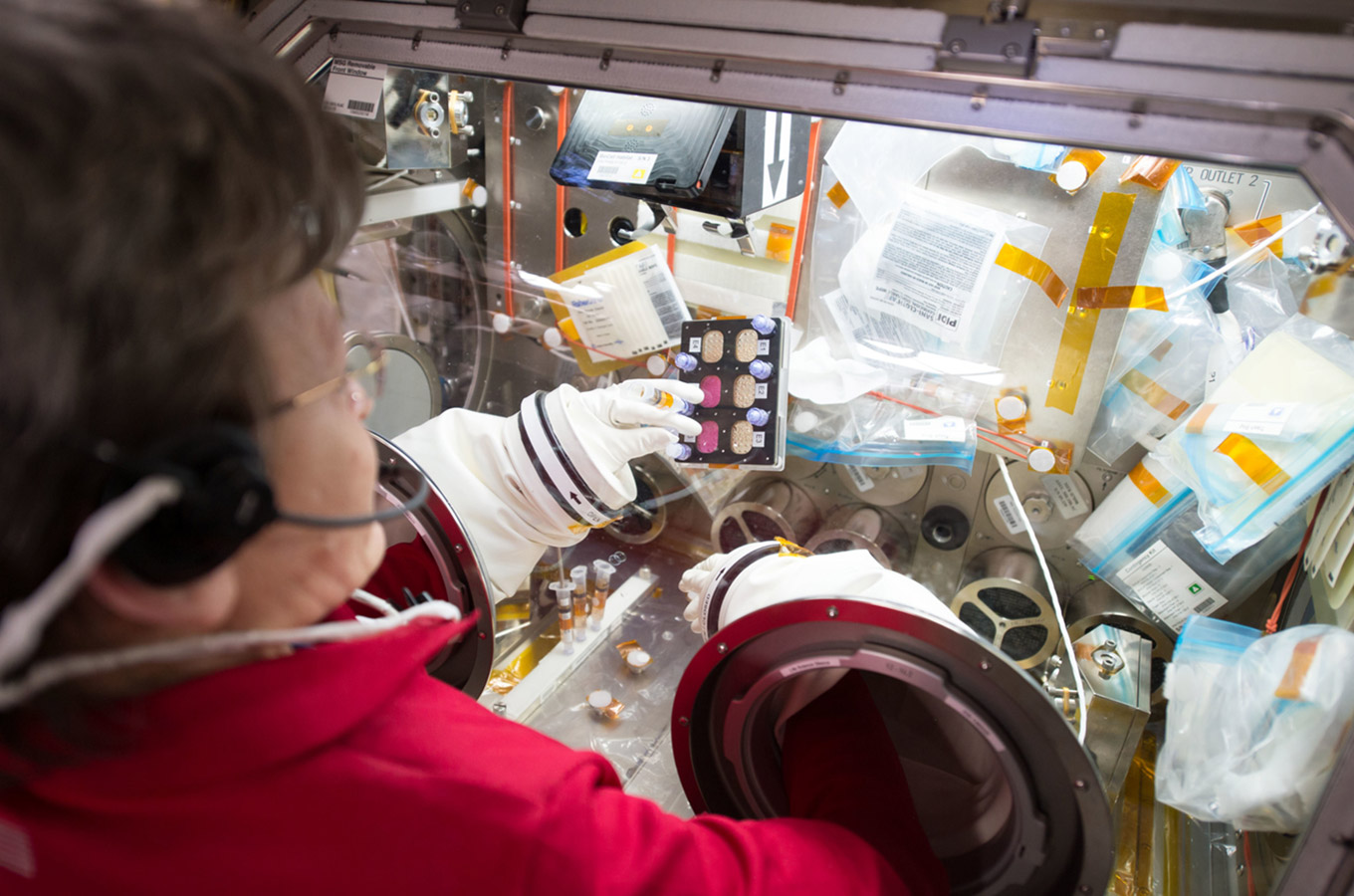 NASA astronaut Peggy Whitson works on the Oncolinx investigation onboard the ISS.

Imagine having the next revolutionary idea with the potential to improve disease treatment, to build better solar cells, or to detect nuclear radiation. What if that idea could benefit from evaluation on an off-the-planet test bed? Now imagine that you could test your idea in space onboard the International Space Station. Are such imaginings far-fetched? Incredibly, no. 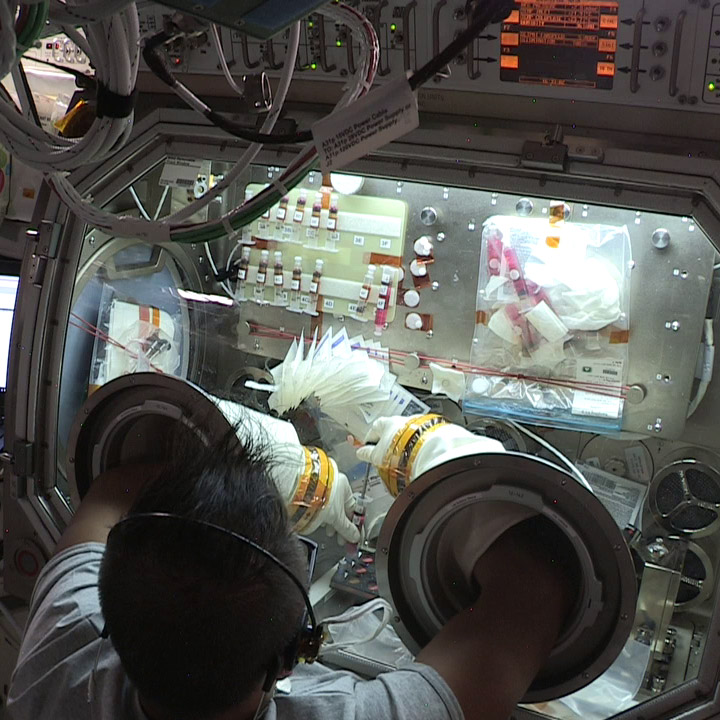 NASA astronaut Joe Acaba working on the LaunchPad Medical investigation onboard the ISS.

Since 2013, the ISS National Lab has partnered with MassChallenge, the largest startup accelerator to award nondiluted funds to early-stage entrepreneurs. Founded in Boston, Massachusetts, MassChallenge has grown to become part of a movement to support entrepreneurs through grant competitions worldwide.

“The Technology in Space Prize is a great example of an ISS National Lab partnership that brings creativity to science in space,” said ISS National Lab Chief Operating Officer Kenneth Shields. “It helps us connect with the brightest minds in today’s entrepreneur community, and it allows us to mentor these nontraditional users and teach them how to develop ideas for space-based research and development.”

Boeing is an ideal partner for the MassChallenge Technology in Space Prize, given the company’s leadership in innovation and longstanding support of the orbiting laboratory. “Over the past 20 years, the ISS has proven to be a vital research and development platform for our nation and serves as an incubator for future commercial opportunities,” said Kevin Foley, Boeing’s global sales and marketing director for the ISS.

MassChallenge-funded projects conducted onboard the ISS have yielded promising results in the materials and life sciences, and upcoming projects span diverse innovations in areas such as drug delivery, diagnostics, optical materials for solar technology, and nanomaterials for radiation detection.

“The quality of proposals we receive continues to improve every year,” said Foley. “We are looking for projects that are feasible and will generate meaningful near-term impact, whether improving the time-to-market of a therapeutic or helping farmers know where to plant crops for best yields.”

Using the Body’s Own Immune System to Fight Cancer

Envision a therapy that delivers a cancer-fighting drug directly to a tumor without harming the healthy cells around it and activates the immune system to continue to hunt and destroy cancer cells. A MassChallenge-funded project conducted by Oncolinx Pharmaceuticals, a biotech company founded in Buffalo, New York, in 2014, used the ISS National Lab to test such a therapy.

Oncolinx scientists attached antibodies made from human immune cells to azonafide cytotoxin, a novel immune-activating cancer drug developed at the National Cancer Institute, to form antibody-drug conjugates (ADCs). The antibodies specifically target tumor cells, and upon attaching to the cancer cells, the azonafide cytotoxin is released.

By delivering the drug locally to the cancer cells, azonafide-based ADCs avoid the side effects associated with traditional types of chemotherapy. Preflight studies showed that the drug can destroy 98.2% of cancer cells.

Another powerful benefit of azonafide-based ADCs is that, in addition to destroying cancer cells, they also activate an anti-tumor immune response that could prevent cancer relapse. One of the reasons cancer cells grow in some people is that their immune system fails to recognize tumor cells as invaders. With azonafide-based ADCs, local immune cells are better able to recognize certain molecules secreted specifically by cancer cells, and that improved recognition can activate the immune system to identify and destroy cancer cells that previously were undetectable. 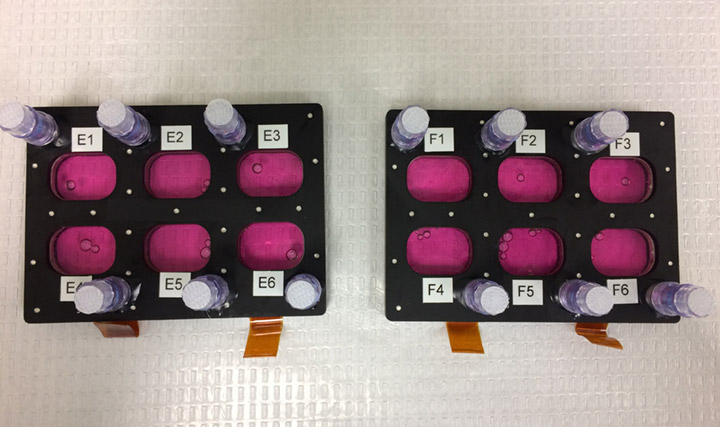 Performing these types of drug studies on the ISS National Lab is beneficial, because cells in microgravity (versus those in ground-based studies) may more realistically reflect how cancer behaves in the body. In microgravity, the cancer cells arrange themselves into three-dimensional (3D) groups, or aggregates, that better resemble tumors in the body. This 3D structure permits improved cancer models that allow researchers to better test the performance of cancer drugs.

“The cool thing about microgravity is the cells float around and bind onto each other, forming these 3D spheres,” Sinha said. “The spheres closely resemble solid tumors as they form in the human body, in contrast to how cells lay flat on the bottom of a petri dish.”

Sinha is still reviewing the spaceflight data. Preliminary results, however, indicate that Oncolinx’s azonafide-based ADCs are particularly effective at treating solid tumors, including an aggressive, fast-moving form of lung cancer. 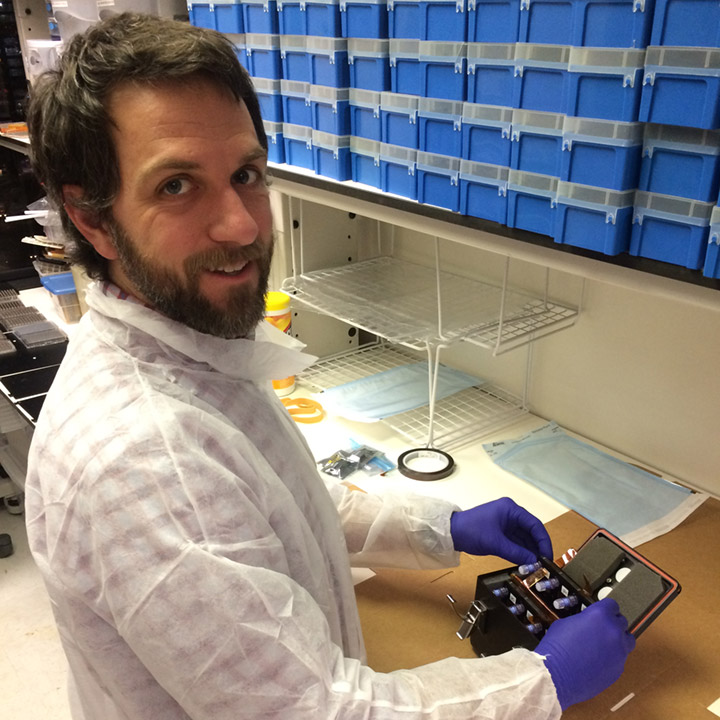 “It’s very potent and very specific,” Sinha said. “Activating the immune system allows us to leverage the body’s natural defenses to target different cancers across the board.”

To date, Oncolinx has partnered with more than 12 leading pharmaceutical companies to develop azonafide-based ADCs. These drugs have the potential to increase the effectiveness of cancer treatment and reduce side effects, and testing azonafide-based ADCs onboard the ISS was a once-in-a-lifetime opportunity, said Sinha. He credits the company’s ISS experiment with helping Oncolinx accelerate their research and get closer to human trials, which he hopes will occur within the next two years.

A MassChallenge-funded project from LaunchPad Medical used the ISS National Lab to test a new biomaterial that can glue bones together. The injectable glue, Tetranite®, has the potential to speed new bone growth while reducing the recovery time and pain of patients, particularly in the orthopedic world, said Brian Hess, LaunchPad Medical CEO and an engineer by trade. Located in Lowell, Massachusetts, LaunchPad Medical was founded in 2014 by Hess and a team of entrepreneurs with extensive expertise in startup medical device development and commercialization.

The company’s experiment, which launched on SpaceX CRS-13 in December 2017 and returned with SpaceX CRS-13 in January 2018, examined how osteoblasts—the cells responsible for bone formation—reacted in the presence of Tetranite®.

“These cells typically slow down when in microgravity, because the space environment accelerates osteoporosis,” Hess said, citing the well-known statistic that without intervention, astronauts can lose, on average, up to 2% of their bone mass for every month they spend in space.

In LaunchPad Medical’s ISS National Lab investigation, the research team examined how the osteoblasts responded to Tetranite® in comparison with osteoblasts alone and osteoblasts in the presence of an existing commercially available bone-graft product. ISS crew members captured photos of the cells to show their health and growth, while also collecting cell culture media every five days to study secreted molecules that relate to bone-cell behavior. Finally, cellular RNAs from the beginning and end of the experiment were compared to evaluate changes in the expression of genes related to bone growth. 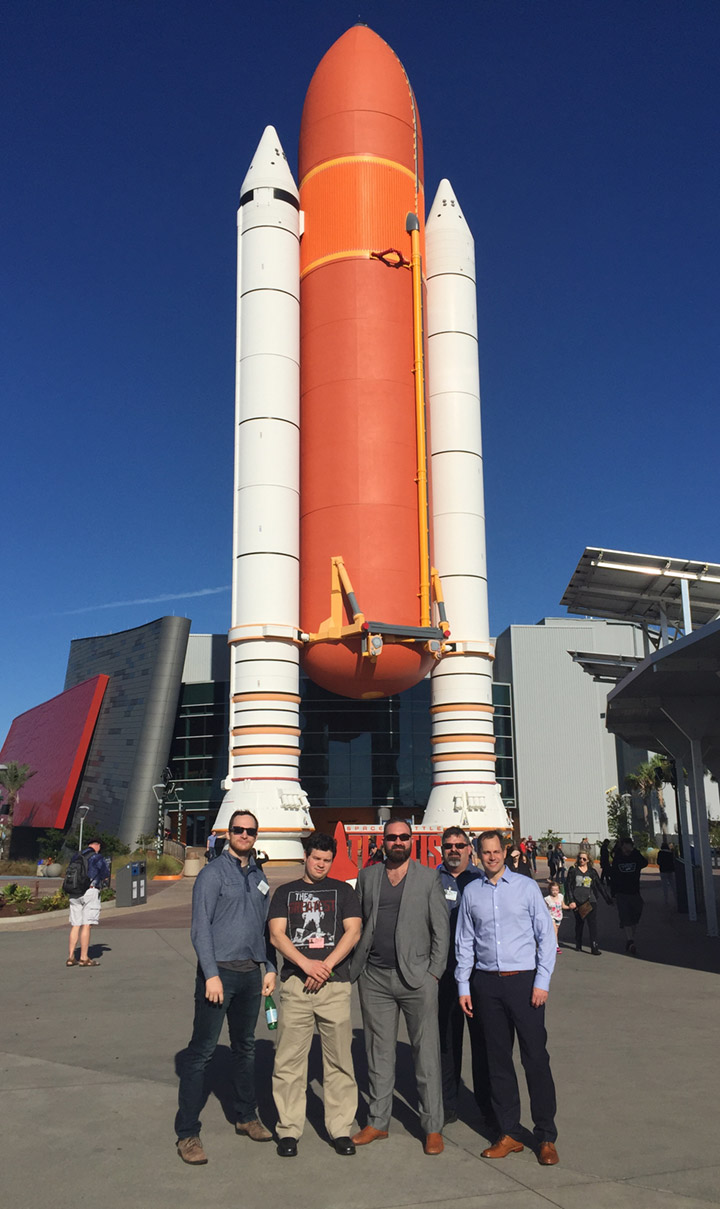 Analyses revealed how the spaceflight osteoblasts responded to Tetranite® by growing and exhibiting bone-formation behaviors. “We saw favorable gene-expression changes marking bone growth that will help advance our studies,” Hess said. “To see this response in the extreme and rapid osteoporosis-inducing space environment motivates us to study Tetranite® for use in patients with osteoporosis, who are susceptible to a bone injury because of their poor bone quality and whose recovery from injury is quite challenging.”

Hess anticipates beginning human trials within the next year and will initially target the dental industry by providing glue to immediately stabilize tooth implants, as opposed to the current treatment plan, which often requires staged surgeries. However, Tetranite® has the most significant potential impact for older people who suffer from osteoporosis. According to the International Osteoporosis Foundation, more than half of the U.S. population ages 50 years and above have either osteoporosis or low bone density. Studies suggest that approximately one in two women and up to one in four men in this age range will break a bone because of osteoporosis.

“Our first program will focus on dentistry and then orthopedics, targeting specific parts of the body, including the spine, cranium, joints, and extremities,” Hess said. 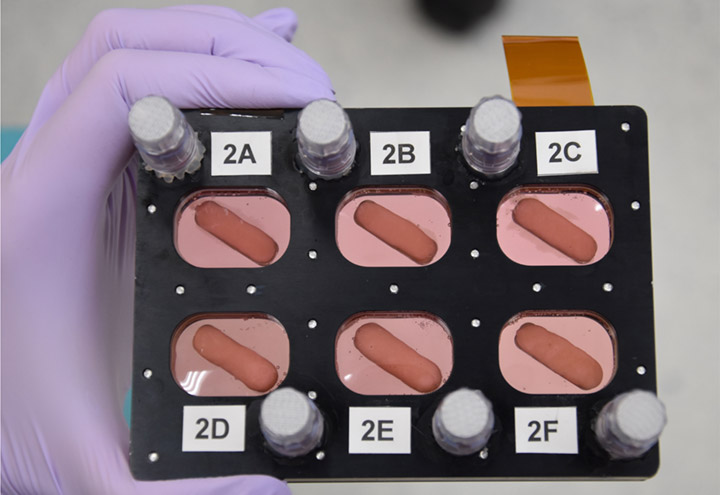 Having an injectable glue that naturally resorbs and is replaced with bone would eliminate or reduce the need to make large incisions in order to drill holes to implant metal screws or other hardware devices to repair damaged bone. Moreover, patients would not have to return for later surgeries to have hardware removed.

“Tetranite® could change the landscape of how clinicians treat bone problems and improve patients’ experience by reducing pain and accelerating healing,” Hess said. “It potentially could be a real revolution to the surgical field of orthopedics.”

As evidenced by these success stories, research and development in space is no longer just the domain of government agencies, academics, or big commercial companies. Small startups, too, can advance their technology or product line using the ISS National Lab.

Over the past year, two additional MassChallenge-funded projects have flown to the ISS National Lab, with results expected in the coming months. In an investigation that launched to the ISS on SpaceX CRS-15 in June 2018, the biotech startup Angiex, Inc., is testing a novel cancer therapeutic that targets both tumor cells and tumor blood vessels that potentially could be used to treat 90% of all cancers.

LambdaVision, Inc., a spinoff company from a University of Connecticut research group, launched an investigation on SpaceX CRS-16 in December 2018 that seeks to leverage the ISS National Lab to improve the manufacturing process for a protein-based retinal implant to restore vision to patients with retinal degeneration.

Thanks to MassChallenge and the ISS National Lab’s partnership with Boeing, new innovators such as these are making their business case through diligent science in microgravity. They are taking critical steps to solve some of the world’s toughest problems and are laying the foundation for a brighter, healthier world.

“Boeing investment in innovation targets an untapped user community of startups through business accelerators like MassChallenge, with outcomes that benefit us here on Earth,” Foley said, “and it holds the potential to expand our economic sphere well beyond 2028.”


“Boeing investment in innovation targets an untapped user community of startups through business accelerators like MassChallenge with outcomes that benefit us here on Earth,” Foley said, “and it holds the potential to expand our economic sphere well beyond 2028.” 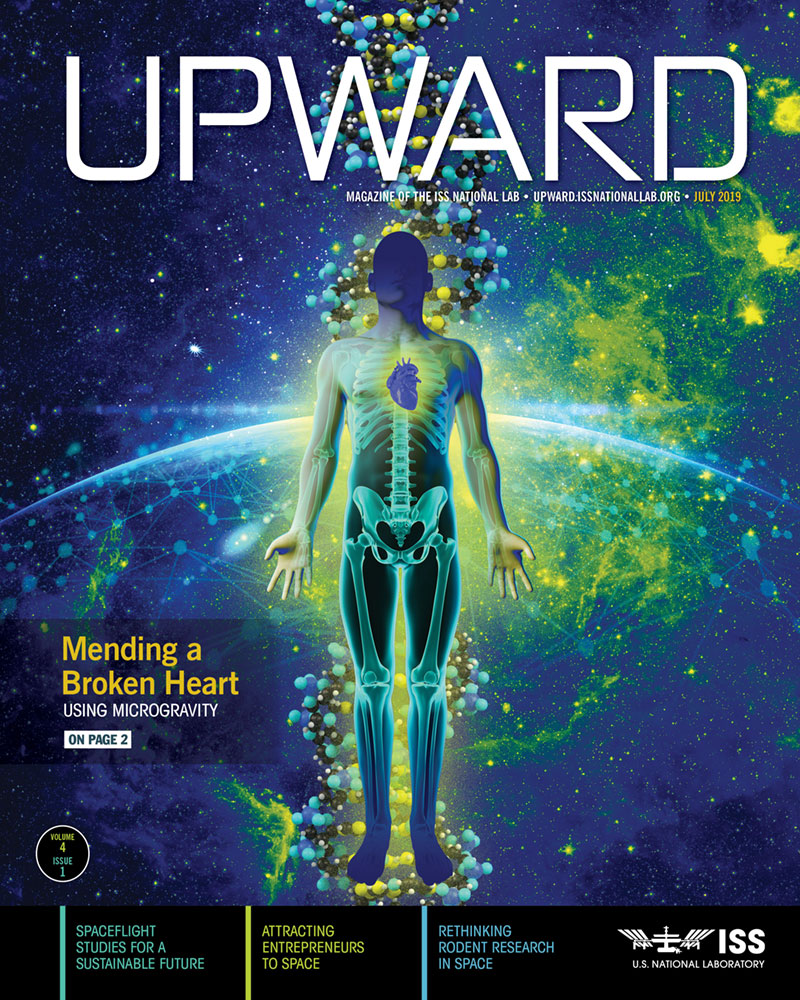 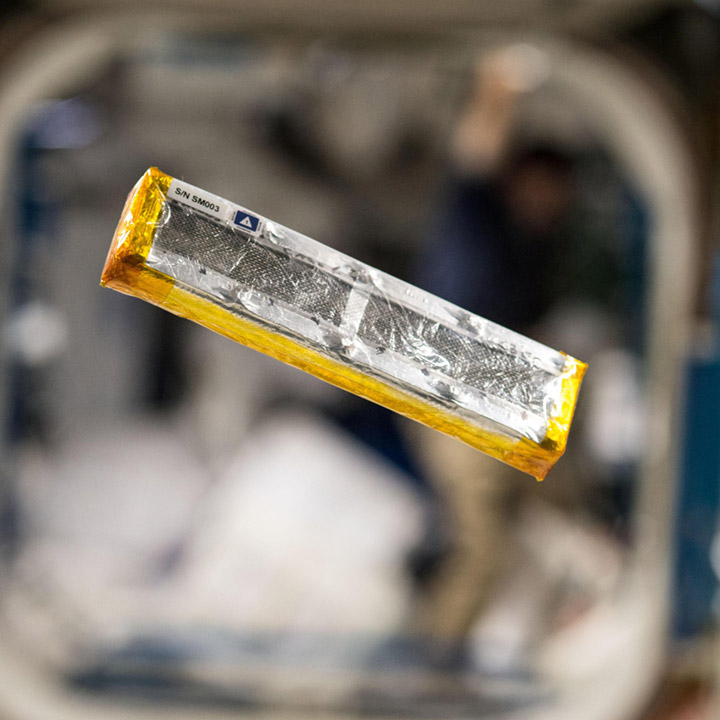 The first MassChallenge project conducted on the ISS focused on technology to create prosthetic limbs that look and feel like a human limb. The startup company, Ras Labs, had developed a new class of “smart” materials—electroactive polymers that drive the functionality of its Synthetic Muscle™ product. Their goal was to enable life-like dexterity for prosthetics, such as contracting and bending without mechanical aid.

In an ISS National Lab investigation, which launched on SpaceX CRS-6 in April 2015 and returned to Earth on SpaceX CRS-8 in May 2016, Ras Labs scientists examined how well Synthetic Muscle™ could function under stresses far beyond what any human being would ever endure. By exposing various polymer coatings and additives to the ISS environment, the experiment revealed the strengths and weaknesses of the materials—insights that will be applied to enhance the durability of prosthetics developed for both broad use and use in robotics.

Read more about this company’s successful experiment in “Bringing Motion to Life: Materials Science Research in Space” from volume 1, issue 2 of Upward.