Microgravity has profound effects on the human body and on cells within the body, and insights gained from research conducted onboard the ISS National Lab are helping to advance the field of regenerative medicine back on Earth. In recognition of its leadership in enabling valuable stem cell and regenerative medicine research, the ISS National Lab was presented with a Leadership Award from the Regenerative Medicine Foundation at the 14th annual World Stem Cell Summit in January 2019. 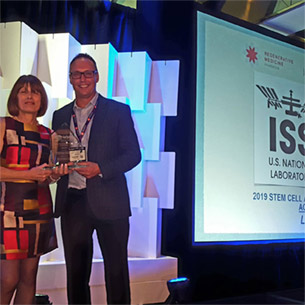 The unique environment of the ISS National Lab allows researchers to study cells in ways not possible on the ground. Microgravity affects the way cells aggregate, allowing them to form into three-dimensional structures that more closely resemble tissues in the human body—providing improved models to study cell behavior and test drugs and accelerating advances in tissue engineering.

Microgravity may also enhance some properties of stem cells, such as their ability to survive, proliferate (increase in number), form 3D aggregates, and differentiate (develop from general-purpose cells into specialized cells)—which could provide significant benefits in advancing personalized medicine and developing stem cell-based regenerative therapies.

Tissue chips, small chips containing cells grown on an artificial scaffold to model the detailed physical structure of human tissue, have the potential to revolutionize medicine and are now being leveraged on the ISS National Lab to enable improved disease modeling and higher-accuracy testing of potential new drugs.

Soon, scientists may be able to manufacture human organs and tissues on the ISS National Lab for use back on Earth using the 3D BioFabrication Facility, which was developed by Techshot and launched to the ISS on SpaceX’s 18th commercial resupply services mission.

The final plenary session of the 2019 World Stem Cell Summit focused on “How Space Technology and Microgravity Will Lead to Profound Benefits to Human Health on Earth,” and several ISS National Lab investigators spoke about the opportunities they have had to leverage the ISS National Lab for valuable research aimed at advancing stem cell biology and regenerative medicine to benefit life on Earth.

This content was abridged and updated from an article that originally appeared on ISS360 in January 2019.

This content was abridged and updated from an article that originally appeared on ISS360 in January 2019.