We know that the symptoms of Parkinson’s disease originate from a decrease in dopamine production due to the loss of neurons. But why are the neurons lost? Is there a genetic cause?

According to more than a decade of research, a mutation in a gene known as LRRK2 (leucine-rich repeat kinase 2) appears to be linked to Parkinson’s disease in some patients. However, despite the knowledge that this gene may be involved in some cases of the disease, researchers have been unable to unlock the full potential of this genetic research because of the difficulty in studying its gene product, LRRK2 protein.

The Michael J. Fox Foundation, which is dedicated to finding improved therapies and ultimately a cure for Parkinson’s disease, has partnered with the ISS National Lab to investigate the structure of the LRRK2 protein by crystallizing it in microgravity. For some proteins, crystallization in space produces larger and higher-quality crystals than on Earth. 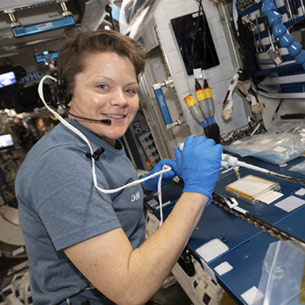 “Therapies targeting LRRK2 are already advancing, even though we don’t know its atomic structure,” said Marco Baptista, Director of Research Programs at The Michael J. Fox Foundation. “But we can’t yet perform structure-based drug discovery that fully leverages the insight of the drug’s binding pocket. To get an accurate picture of the structure, researchers need LRRK2 protein crystals that are large and have few defects. However, LRRK2 crystals grown on Earth suffer from limitations in these areas.”

Protein crystals grown onboard the ISS National Lab don’t grow like they do on Earth—with less pull from gravity, crystals can grow larger and in a more uniform and ordered pattern. Once the large, well-ordered crystals return to Earth, they are then easier to observe using high-resolution imaging techniques. Thus, crystallization of LRRK2 on the ISS could lead to improved structure determination of LRRK2 and help advance structure-based drug design.

The Michael J. Fox Foundation’s first investigation to crystallize LRRK2 on the ISS National Lab launched on SpaceX’s 12th commercial resupply services (CRS) mission. Although the resulting crystals were of high quality, they were not large enough to improve structure determination of LRRK2.

The Michael J. Fox Foundation sent a second investigation to the ISS National Lab on Northrop Grumman CRS-10 to crystallize LRRK2 using a different type of hardware to enable larger crystal growth. This time, the team, which also includes researchers from Merck & Co. and Goethe University Frankfurt, was also able to monitor the crystals in orbit and make any necessary adjustments to improve crystal growth. The results from this experiment could help researchers gain new knowledge in the fight against Parkinson’s and other diseases.

This content was abridged from an article that originally appeared on ISS360 in November 2018.