Since 2013, the ISS National Lab has partnered with MassChallenge, the largest startup accelerator to award nondiluted funds to early-stage entrepreneurs. Founded in Boston, Massachusetts, MassChallenge has grown to become part of a movement to support entrepreneurs through grant competitions worldwide. 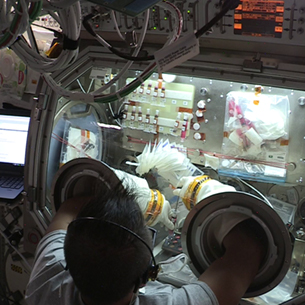 A MassChallenge-funded project from LaunchPad Medical used the ISS National Lab to test a new biomaterial that can glue bones together. The injectable glue, Tetranite®, has the potential to speed new bone growth while reducing the recovery time and pain of patients, particularly in the orthopedic world, said Brian Hess, LaunchPad Medical CEO and an engineer by trade. Located in Lowell, Massachusetts, LaunchPad Medical was founded in 2014 by Hess and a team of entrepreneurs with extensive expertise in startup medical device development and commercialization.

The company’s experiment, which launched on SpaceX CRS-13 in December 2017 and returned with SpaceX CRS-13 in January 2018, examined how osteoblasts—the cells responsible for bone formation—reacted in the presence of Tetranite®.

“These cells typically slow down when in microgravity, because the space environment accelerates osteoporosis,” Hess said, citing the well-known statistic that without intervention, astronauts can lose, on average, up to 2% of their bone mass for every month they spend in space.

In LaunchPad Medical’s ISS National Lab investigation, the research team examined how the osteoblasts responded to Tetranite® in comparison with osteoblasts alone and osteoblasts in the presence of an existing commercially available bone-graft product. ISS crew members captured photos of the cells to show their health and growth, while also collecting cell culture media every five days to study secreted molecules that relate to bone-cell behavior. Finally, cellular RNAs from the beginning and end of the experiment were compared to evaluate changes in the expression of genes related to bone growth.

Analyses revealed how the spaceflight osteoblasts responded to Tetranite® by growing and exhibiting bone-formation behaviors. “We saw favorable gene-expression changes marking bone growth that will help advance our studies,” Hess said. “To see this response in the extreme and rapid osteoporosis-inducing space environment motivates us to study Tetranite® for use in patients with osteoporosis, who are susceptible to a bone injury because of their poor bone quality and whose recovery from injury is quite challenging.”

Hess anticipates beginning human trials within the next year and will initially target the dental industry by providing glue to immediately stabilize tooth implants, as opposed to the current treatment plan, which often requires staged surgeries. However, Tetranite® has the most significant potential impact for older people who suffer from osteoporosis. According to the International Osteoporosis Foundation, more than half of the U.S. population ages 50 years and above have either osteoporosis or low bone density. Studies suggest that approximately one in two women and up to one in four men in this age range will break a bone because of osteoporosis.

“Our first program will focus on dentistry and then orthopedics, targeting specific parts of the body, including the spine, cranium, joints, and extremities,” Hess said.

Having an injectable glue that naturally resorbs and is replaced with bone would eliminate or reduce the need to make large incisions in order to drill holes to implant metal screws or other hardware devices to repair damaged bone. Moreover, patients would not have to return for later surgeries to have hardware removed.

“Tetranite® could change the landscape of how clinicians treat bone problems and improve patients’ experience by reducing pain and accelerating healing,” Hess said. “It potentially could be a real revolution to the surgical field of orthopedics.”

This content was abridged and updated from an article that originally appeared in Upward Volume 4 Issue 1 from July 2019.