While researchers on Earth have had limited success in printing human elements like bones and cartilage, the ability for them to manufacture soft human tissue, such as blood vessels, has proven to be much more difficult. Specifically, the bioinks used in 3D bioprinting have a low viscosity, and on Earth, scientists must use scaffolding to support bioprinted structures and prevent them from collapsing. However, this scaffolding makes it difficult to construct void spaces needed in tissues. 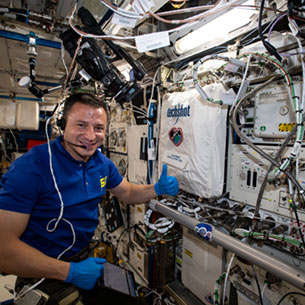 NASA astronaut Andrew Morgan works on setting up the BioFabrication Facility to test-print tissues as part of an investigation into whether human organs can be 3D printed in the weightless environment of space.

Bioprinting in microgravity could prove beneficial because scaffolding is not needed to keep printed structures from collapsing, allowing scientists to overcome what has been a significant hurdle in ground-based biomanufacturing of human organs.

To further assist in the printing of human elements on the space station through the BFF, Techshot partnered with nScrypt, widely regarded as one of the most reputable 3D-printing companies in the world. To address bioink-related constraints to bioprinting on Earth, nScrypt’s patented SmartPump Micro-Dispensing tool head will enable precise placement of bioink, thereby enabling stronger formation of printed materials.

Techshot and nScrypt are first seeking to validate the BFF—initially by attempting simple engineering prints, with the expectation to progress to more complex cardiac-like tissue. Within Techshot’s cell-culturing system, the printed tissue is expected to strengthen over time—and once it is viable and self-supporting, it will be sent back to Earth for further analysis.

According to the Centers for Disease Control and Prevention (CDC), on any given day in the United States, an estimated 75,000 people are on the active waiting list for organs, far exceeding the organs available for patients. While the road to assembling a human lung or other organs is likely still many years away, the space station is enabling researchers and engineers the ability to develop, test, and validate new facilities that could have dramatic impacts on patient care back on Earth.

More broadly, through the emergence of new space-based facilities such as the BFF, the ISS National Lab is evolving to meet the needs of the modern-day research community, providing more opportunities for groundbreaking, innovative science.

This content was abridged and updated from an article that originally appeared on ISS360 in July 2019.