Proteins—large molecules made up of hundreds to thousands of amino acids—are vital to the proper function of tissues and organs in our body. Each protein has a unique three-dimensional folded structure based on the sequence of amino acids, and this structure determines the protein’s function. The more scientists know about a protein’s structure, the better they can understand its function and design drugs to work with the protein and treat disease. 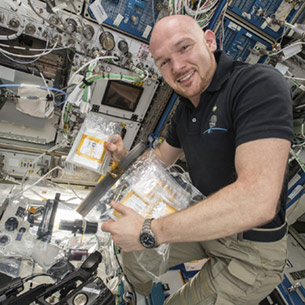 The ISS National Lab is a valuable platform for molecular crystal growth because crystals grown in microgravity are often larger and more well-ordered than Earth-grown crystals. The reduction of gravity-driven forces such as convection and sedimentation allows for a slower and more orderly incorporation of molecules into the crystalline lattice, and analysis of higher-quality protein crystals enables better structure determination. Two recent ISS National Lab investigations are seeking to use microgravity to grow high-quality crystals of medically important proteins for improved structure determination.

An investigation from Oak Ridge National Laboratory that launched on SpaceX’s 14th commercial resupply services (CRS) mission is focused on crystallizing an enzyme called AChE that is affected by nerve gas and pesticide poisoning. Organophosphates are a type of chemical compound used in nerve gas and pesticides that target the AChE enzyme and cause it to malfunction, leading to paralysis and death. Organophosphate poisoning is responsible for more than 200,000 deaths worldwide each year.

The research team aims to use microgravity to grow AChE crystals that are large enough for analysis using neutron crystallography. Knowing the position of hydrogen atoms in AChE’s structure is key to understanding how the enzyme functions and how it might be affected by organophosphates. This information could lead to the development of faster-acting antidotes to pesticide and nerve gas poisoning that could save more lives.

An investigation from Frederick National Laboratory for Cancer Research that launched on SpaceX CRS-16 is aiming to leverage the ISS National Lab to crystallize KRAS proteins. KRAS is the most frequently mutated member of the RAS family of genes—mutations of which account for more than 30 percent of all human cancers. Mutations in the KRAS gene are responsible for 95 percent of pancreatic ductal adenocarcinoma (the most common type of pancreatic cancer), one-third of non-small cell lung cancer (the most common type of lung cancer), and up to half of colorectal tumors.

Lung, colorectal, and pancreatic cancers are among the deadliest and most costly types of cancer to treat. According to the World Health Organization, cancer caused an estimated 9.6 million deaths in 2018. The economic burden of cancer is also significant, and the World Health Organization reports that in 2010, the total annual economic cost of cancer was estimated to be $1.16 trillion.

Even after decades of research, there are currently no inhibitors that target RAS genes such as KRAS. It is difficult to obtain high-quality crystals of full-length KRAS proteins on Earth, and crystallization in microgravity may yield improved crystals that could aid in structural determination and lead to the development of inhibitors to treat cancers associated with the KRAS gene. In this ISS National Lab investigation, the research team sought to crystallize full-length unmodified KRAS proteins, cancer-causing KRAS mutants, and KRAS proteins in complex with various small molecule inhibitors.

This content was abridged from an article that originally appeared on ISS360 in January 2019.