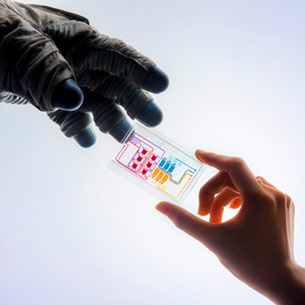 Advances in bioengineering have led to the development of tissue chips—systems containing human cells grown on artificial scaffolding to represent functional units of an organ. Such tissue chips mimic the 3D structure and function of human tissue, enabling accelerated and higher-accuracy drug screening. Tissue chips also provide improved models of disease that could help scientists uncover the molecular mechanisms behind a wide range of conditions affecting people on Earth.

In 2016, the National Center for Advancing Translational Sciences (NCATS), part of NIH, announced a four-year collaboration with the ISS National Lab to support the use of tissue chip technology for translational research onboard the ISS to benefit human health on Earth. In June 2017, five initial projects were awarded grants through the NCATS Tissue Chips in Space initiative. In December 2017, the ISS National Lab, NCATS, and the National Institute of Biomedical Imaging and Bioengineering (NIBIB)—also part of NIH—announced a second funding opportunity supporting tissue chip research in space, and four awardees were announced in October 2018.

The five initial Tissue Chips in Space investigations have already launched to the ISS National Lab:

This content was abridged and updated from an article that originally appeared on ISS360 in March 2019.